Tagged releases with attached builds are great; especially when you don’t need to tag, build, upload, and release it yourself. Enter Semantic Release, an ‘aromantic’ automated release system.

Working in the tech industry, you’ve probably heard of semantic versioning: the practice of marking releases with three numbers, separated by periods, denoting the major, minor, and patch version. The ‘official’ semver website has a detailed explanation, which relies on the technical language of the RFC-2119 versioning specification. Professionally, semantic versioning is used to ensure package managers can calculate an effective map of dependencies, ensuring breaking changes are not accidentally relied upon by any given program.

Why release your own code automatically with semantic versioning? At this point in history, it’s a best practice. At the very least, you’ll have a nice version history and, on platforms like Github, a nice .zip of your code and a build at that point in time that you can archive. At best, it provides a very well-thought-out, clean mechanism for communicating how much your software has changed to those who rely on it.

On to the meat; how do I use Semantic Release?

If you’re a JavaScript user, you’ll want to take a look at the JavaScript implementation of semantic release. As the projects I maintain are mostly written in Python, I opted for the python implementation instead, as it would be easier to integrate with the Django projects and python libraries I maintain.

In the root of your repository, you ought to already have a setup.cfg file. If not, you can use this Django app for reference. Typically this python setup file contains config values for all tools used in the repository, like mypy or flake8. At the end of the file, add these lines:

Within your package (the main folder of your python project,) in the directory’s __init__.py file, add this line if it does not already exist:

Finally, you’ll need to add a step to your CI. I’m using Github Workflows today, but you can use anything that allows job dependencies and secrets storage. Add the following step to your workflow file, ci.yml:

Congratulations! You’ve set up semantic release on your repository. At this point, you’ll be able to push and merge commits and pull requests with the following tags, and the semantic release program will check the commits for the most severe change, make a new release and tag, build a release, and add notes to your changelog. In your repository, the commit will look like this:

Your shiny new release, with changes and assets, will appear like so: 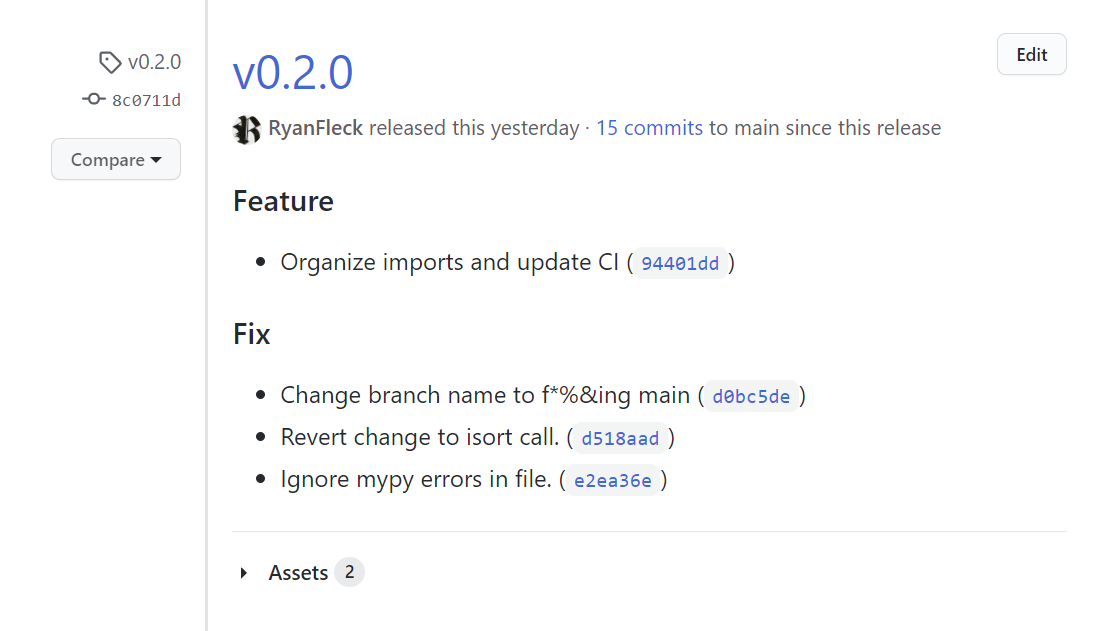 Semantic release, when configured correctly, is an invaluable time-saving tool (as long as you name your commits and pull requests correctly!)

Here’s a list of the tools and resources mentioned in this article:

And, as always, thank you for reading!